The story goes that one night on Yawning Man‘s 2015 South American tour, the instrumental desert rock pioneers stopped into ION Studios in Buenos Aires. With just a single night in that hallowed space, which has played host to many great Argentinian acts and offerings, they put to tape the tracks that would become the Historical Graffiti LP — and it is LP/DL only, released on Lay Bare Recordings — their first full-length outing since 2010’s Nomadic Pursuits (review here).

Of course, in that six-year stretch, Yawning Man have hardly been inactive, shifting their lineup around founding guitarist Gary Arce and bassist/guitarist Mario Lalli (also Fatso Jetson), releasing the Yawning Man/Fatso Jetson split LP in 2013, and touring, Arce also stepping out of the band’s confines to participate in numerous collaborations, side-projects, guest appearances and so on. That spirit of being able to go anywhere and still bring something distinct is writ large all over the unassuming five tracks/33 minutes of Historical Graffiti, which is further set apart from its predecessor and in fact the whole of Yawning Man‘s catalog for its guest contributions.

Joining Arce, Lalli and drummer Bill Stinson are keyboardist/Mellotronist Malene Pedersen (also of Lewd Flesh), as well as violinist Sara Ryan and accordionist Adolofo Trepiana, whose contributions to opener and longest track (immediate points) “The Wind Cries Edalyn” and the closing title-track aren’t to be understated in providing a grounding but still gentle and melodic presence alongside the band’s otherwise dreamy tonality, which seems set for maximum drift across the album’s span.

Not a complaint, obviously. Yawning Man shine best when they shine like a hot sun — see also: any number of other desert-minded descriptors of Arce‘s shimmering, sentimental guitar tone — and for those who’ve spent years anticipating an announced full-length called Gravity is Good for You that remains elusive, it seems fair enough to take whatever comes at this point as regards output from Yawning Man proper. The sweet, lush immersion of Historical Graffiti, which bears the subtitle The ION Studios Session, Buenos Aires, Argentina on its front cover, makes it all the easier for the taking.

Yawning Man are known for their jamming, and a lot of the basis of their influence, particularly on European post-desert heavy psych, has been in that ethic of improvisation, but the depth of arrangement throughout, beginning with the layering of guitar and violin early on “The Wind Cries Edalyn,” speaks to some plan. I don’t know whether Ryan came in afterwards and dubbed strings over the basic tracks of guitar, bass, drums and keys, or what, but even as it runs deeper and introduces Trepiana‘s accordion, there’s a sense of a plan at work.

That’s not to say the song’s foundation isn’t still a jam — it most likely is — just that the jam has been fleshed out in exciting ways that one might not necessarily expect from a Yawning Man release. That becomes the running theme as Historical Graffiti dips and dives, making its way through a tracklisting that offers its shortest cut in centerpiece “Naomi Crayola” (3:06) after “Her Phantom Finger of Copenhagen” (6:58), then works its way through consecutively longer songs again, “The Secret Language of Elephants” (6:28) and “Historical Graffiti” (7:49), to end out, all the while sounding fluid to a point of hypnosis, geared toward conveying the decades-in-the-making chemistry between Lalli and Arce as the foundation from which moments like the otherworldly soundscape of “Her Phantom Finger of Copenhagen” flow outward, gorgeous and consuming.

Elements come and go throughout. That is, the violin and the accordion aren’t on every song. Pedersen‘s keys are fairly consistent, but it’s Stinson‘s drums that make the primary impression on “Naomi Crayola,” pushing the quicker track with an initial straightforward beat that departs somewhat from the languid “Her Phantom Finger of Copenhagen” and “The Wind Cries Edalyn” before it.

The centerpiece shifts momentarily into a noise freakout once or twice but soon enough returns each time to its linear movement, fading out to the more subdued “The Secret Language of Elephants,” which seems to return Historical Graffiti to its arc, accordion and all, though there’s some more weighted thrust there as well that comes and goes — chorus-like, though I’d be hesitant in most cases to try and lay a structural expectation on anything Yawning Man do.

Still, it’s a memorable impression to start side B of the vinyl, Ryan‘s violin standing out in the song’s second half, and “Historical Graffiti” itself continues to make the most of this flourish while highlighting the perpetually underrated guitar tone of Arce, captured immaculately at ION with a full sound backed by the bass, keys, drums, violin and accordion that for those who’ve had experience with Yawning Man and those who haven’t should serve as a vibrant refresher of/introduction to what has always been at the core of the band.

Historical Graffiti may be the result of stopping by a studio for a night in another country on an ongoing tour, laying down some tracks and moving on, but the scope it offers would’ve taken other groups months to conjure if they could at all, and in the end, it’s way less of a one-off and way more of a gift. It should be treasured accordingly. 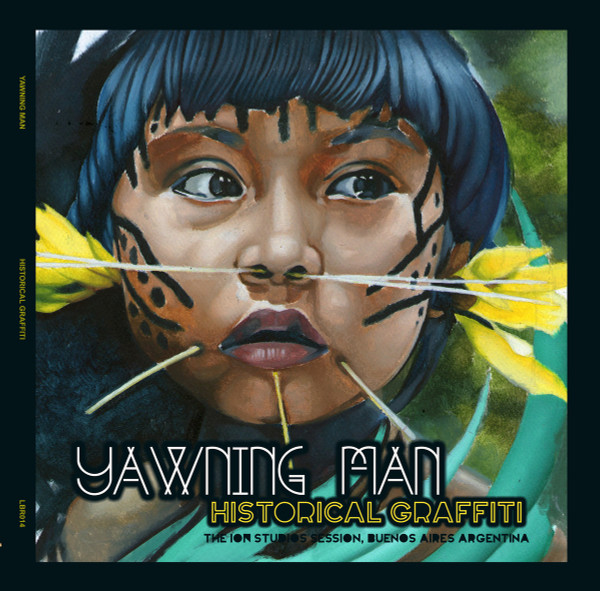