These CDs are the bands original stock from The Mans Ruin Label circa 1999. All new in shrinkwrap.

Rewarding albums aren't always albums that can be easy to digest on the first listen. A case in point is Flames for All by Fatso Jetson, whose alternative rock and space rock tends to be quirky, angular, eccentric and dark. Occasionally, the band comes up with an infectious hook that grabs you right away. "Let's Clone," for example, is as catchy as it is odd and goofy -- it almost brings to mind something Devo might have done in the late '70s or early '80s. But for the most part, Fatso doesn't use hooks to pull listeners in. Most of their songs aren't overly accessible -- the thing that eventually sells you on Fatso is its inventiveness and risk-taking outlook. "Vatos of the Astral Plane," "Fucked Up and Famous" and other strange offerings (some with vocals, some instrumental) are meaty, but the listener might need to listen to the CD several times before realizing how meaty they are. If listeners are able to accept Flames for All on its own terms, the rewards are certainly there.

Flames For All is the third studio album by the desert rock band Fatso Jetson. Recorded in August 1998 at Monkey Studios where the band had recorded some months prior, it would be released circa January 1999. Notably it would be the band's only album on Man's Ruin Records and the only album to feature Gary Arce (Yawning Man) as a second guitarist. Along with a CD version there would be a translucent blue 10" edition with only the first five songs. Flames For All would see a cassette re-issue in 2019. 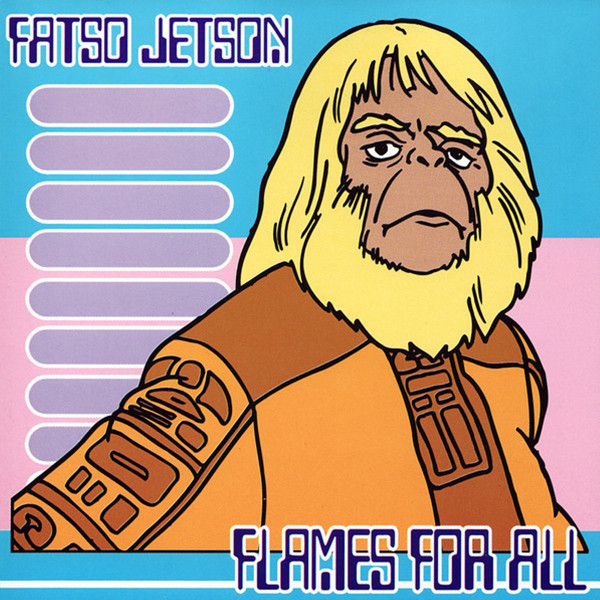 FATSO JETSON - FLAMES FOR ALL CASSETTE